At its May 3 meeting, the Forest Preserve Board of directors approved grants totaling $61,200. The funds will support paid internships in the Forest Preserves and career exploration programming for more than 120 youth during the summer of 2019.

To the Student Conservation Association (SCA), the Foundation awarded $50,000 to support the Chicago Conservation Leaders Corps (CCLC). The funding will directly support the wages and associated costs of 22 students from Chicago to participate in the six-week summer CCLC program. CCLA is a collaboration with Friends of the Forest Preserve and the Forest Preserves of Cook County. This is the fifth consecutive year that the Foundation has provided funding to SCA/CCLC.

The Foundation received support from the Harry and Jeanette Weinberg Foundation to continue its investment in Conservation Corps interns who are City of Chicago residents. 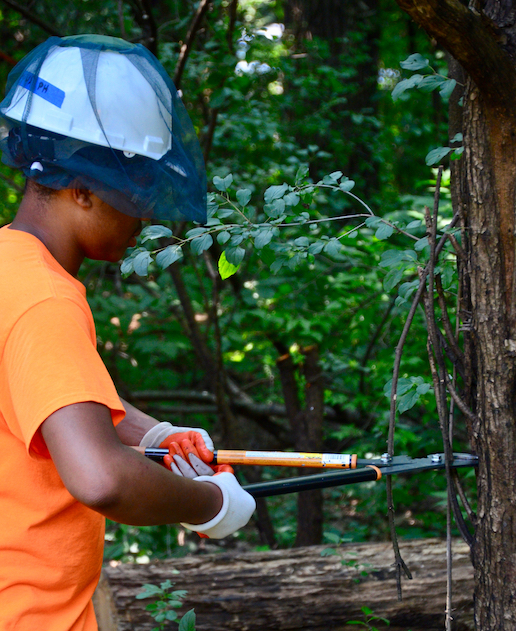 Starting in 2015, Foundation funding allowed SCA to run one full crew at Trailside Museum of Natural History, with 10 crew members and two leaders, as well as piloting a chainsaw crew at Dan Ryan Wood. In 2016, the Foundation helped support a full crew at Theodore Stone Forest Preserve. Theodore Stone also served as the site for training and orientation for the entire Youth Conservation Corps program that year. In 2017, with the support of the Foundation, SCA fielded larger crews, with 11 members each. And in 2018, SCA fielded a team at Chicago Botanic Gardens as well as Harms Woods, a new site for SCA.

SCA’s mission is to build the next generation of conservation leaders and inspire lifelong stewardship of the environment and communities. It does this by engaging young people in hands-on service to the land. Its mission aligns strongly with the Forest Preserve Foundation, as both organizations actively engage in youth-oriented protection and restoration of native habitats, and SCA’s youth programming in Chicago works largely in the Forest Preserves.

SCA is a national leader in preparing high school-age youth and young adults for a lifetime of conservation service and success.

A day to explore careers

Career Exploration Day gives Forest Preserve Experience interns an opportunity to interact with and engage directly with scientists from the fields of forestry, wildlife biology, ichthyology and ecology. During the day, the youth also engage in hands-on activities such handling wildlife, measuring trees, and using equipment that may spark a love for the work and nature.

The Forest Preserve Experience is a five-week summer jobs program that provides paid employment for youth (ages 14 to 19) whose families utilize the services of the Housing Authority of Cook County.

With these grants, the Foundation has invested $1.6 million toward increasing access to the Forest Preserves of Cook County.